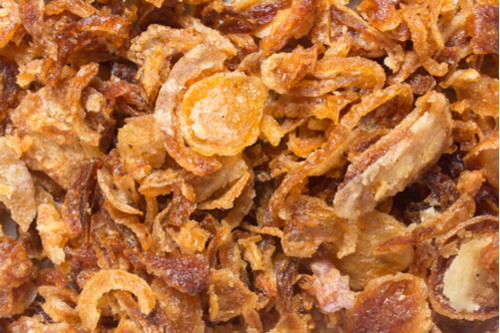 We know that vegetables are important, but we can get awfully sick of eating the same dull veggies, week in and week out. One way to tempt jaded palates is with a flavorful, crunchy garnish. Crispy shallot rings are the perfect addition to green beans or salads, and well, just about any savory dish. Try them as a topping for burgers. The shallot rings look nice, like you fussed for hours, and they add flavor, too.

They aren’t hard to make and there’s a bonus: you can use the oil in which you fry the shallots, for cooking, to add a subtle shallot flavor to anything you sauté or fry. I even use the cooled oil to make shallot mayo in the blender. Wonderful stuff!