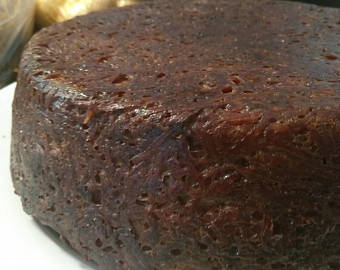 Most people think of dairy noodle kugel or potato kugel when they picture, with their mind’s eye, an image of this sort of Ashkenazi Jewish pudding. In reality, kugel is so much more. One of the most interesting types of kugel, is Kugel Yerushalmi, or Jerusalem Kugel, with its deep brown crusty exterior and dark amber insides. It is both savory and sweet: sweet because it’s made with caramelized sugar, and savory because of a liberal dose of ground black pepper.

If you go into Mea Shearim on a Thursday night, you’re bound to see huge towers of the round kugel, which is sold over the counter in delis, by weight. Oddly, it is the only thing that is eaten with vinegar-brined pickles. Otherwise, salt-brined pickles are the Israeli way.

You can make Kugel Yerushalmi at home, but it’s best baked in humongous amounts, overnight, in a very slow oven.