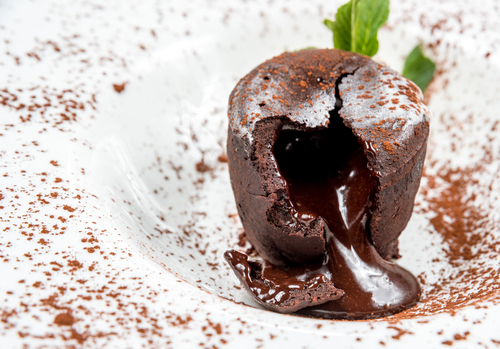 Back in the 1990s, Chef Jean-Georges Vongerichten created the original molten hot chocolate cake, with that center that just oozes hot chocolate all over your plate. You have to be doing hardcore penance to pass on dessert when this amazing chocolate treat is on offer. But if you keep kosher, you know the frustration that every truly delicious dessert seems to require butter, which makes these sweets a no-no after a meat meal.

Do not despair, as the cakes are perfectly delicious made with coconut oil, or if you’re not averse, margarine. Not only that, but the cakes are easy-peasy to make and oh-so-impressive on your table. Best of all, the batter can be made ahead of time. All you have to do is bring the batter to room temperature, then bake the cakes while your guests are eating their main course.

Note: The batter can be refrigerated for several hours; bring to room temperature before baking.