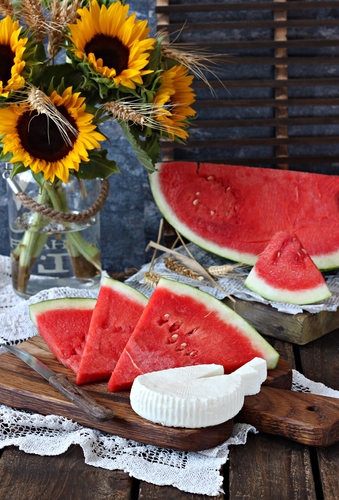 For a change, I offer no true recipe, as it is too hot to type! Well, thanks to a/c, that’s not really true. Nonetheless, we are not in the mood for heavy, hot foods at this juncture. Which is why we have been rediscovering the summer Middle Eastern pleasure of watermelon served with Bulgarian cheese. The sweetness of the melon is complemented by the saltiness of the cheese. The cool interplay of flavors is soothing for cranky palates, especially if you garnish with mint, or get really daring and use basil, instead.

Cut up the fruit and cheese however you like it best. But make sure that you are getting a bit of cheese with each mouthful of melon.

And that’s it! Easy peasy. Because you don’t need to be stuck in the kitchen for hours, when the sun is beaming down and the kids are underfoot.