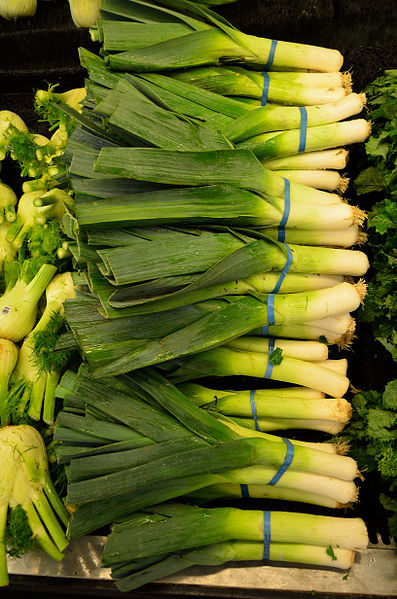 You’d be mistaken for thinking that the only seder is the Passover seder. There’s the seder for Tu B’Shvat, when we eat a selection of items from the earth’s bounty and recite relevant passages from the Torah. And there’s also the Rosh Hashana seder when we eat specific foods, the Hebrew names of which are used in the form of play on words, and incorporated into prayers for the coming year.

We spoke about Chraimeh, a few weeks ago. Now we speak of leeks, which the French call “poor man’s asparagus.” On these we say, “Father in Heaven, please cut off our enemies,” the word “cut off” (cartu) being similar to the word “leek,” (carti).

Pass up big fat leeks for this delicacy, those are for soup.  You want thin, young leeks, one per person. Use only the white and pale green part of the leek, no more than 3″ from bottom to top.

Simmer in water and white wine with half a lemon thrown in, some peppercorns, a couple of whole cloves, and a few sprigs of parsley. When tender, top with the vinaigrette of your choice and serve cool, sprinkled with chopped chives. (Note that some people do not eat sour foods on Rosh Hashana.)